Interview with Tyson Ritter of The All-American Rejects 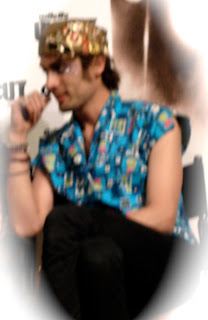 I recently had the opportunity to interview Tyson Ritter of The All-American Rejects on fashion and more for Saturday Night Magazine.
Here is what he had to say...
On Performing:
“When I used to go play at bars when I was a kid I used to get this terrible--my entire body would be affected by it, I’d be in the bathroom the entire 30 minutes right before I play. So my nerves would be like completely shot and wrecked.” Ritter explained that “When you get your show together and you play it every night as long as you’re confident in what your show is, now the nervousness is this hope that this invisible umbilical cord that I gave the crowd is gonna, you know, not only feed them but hopefully they feed me with their energy too.” Ritter also said, “There are nights we walk off stage and are like maybe we didn’t give it all that we could. But some nights we’re pissed because they didn’t. And we’re like man we killed it and the crowd didn’t deserve what we gave them.”
On Embarrassing Moments:
“I’ve fallen offstage. I’ve had my pants undone and I don’t wear underwear.”
On Fashion:
"I feel like it’s really important to sort of sometimes suspend disbelief even with you as the person you are in the real world. I try to be a cartoon now. I don’t know why, it’s more fun and I feel like people understand me before they meet me a little bit more just because I’m a person who doesn’t care about a lot of the way that they dress. I like being loud and cartoony." He also described his style saying, “Sometimes I’m in a suit, sometimes I’m half naked covered in glitter. It just sort of depends on what kind of show I wanna give.”

“I’m hugely inspired by the sort of the fusion that Bowie did fashion and art. I’m gonna continue to push the envelope as much as I can because of people like Bowie and Iggy Pop and Freddy Mercury and all these people who were sort of very avant-garde with their stage."

"When I go see a band I want my ears to hurt the next day and I want to feel like I saw a show, not just a band play their songs.”

You can find out how the All-American Rejects, and other artists get ready to take the stage HERE in the short film series UNCUT.