We’ve all heard the stories about how exciting and hip the Sunset Strip used to be in the late 60s to 80s.  For those of us who were not around then to experience it for ourselves, stories of bands like Guns N Roses, Poison, The Doors, and The Byrds ruling the strip are mere legends of an era passed.  Somehow rock n roll’s golden Sunset Strip lost its luster and became the stomping ground of tourists hoping to catch a glimpse of rock history, but often disappointed by its emptiness and lack of local popularity.  If they are lucky they might stumble upon the Strip on one of those happening nights when an amazing band is playing, but that isn’t every night. Lately, the Strip has seen many talented but unknown bands play to an undeserved empty room.

Last Saturday, however, was one of those days where the strip was what it is born to be.   Ten thousand music fans crowded the street for the 2nd annual Sunset Strip Music Festival to watch more than 40 bands, including Ozzy Osbourne, KORN, Pepper, The Donnas, Shiny Toy Guns, Unwritten Law, The Ringers, LMFAO, and many others. It was the first time the famous Sunset Strip was closed to traffic for an event like this.  The festival was unlike other Southern California outdoor fests because not only were performances on two outdoor stages, but at the venues as well.  Concertgoers rushed from Whisky to Cat Club to Roxy to Key Club to hear the great variety of music the festival offered.  Whether your preference was metal, punk, indie, pop, or hip-hop there were options for just about every musical taste.

With such a large concentration of music lovers, the Sunset Strip became the ideal people watching location for checking out rock and roll inspired fashion.  This included tons of animal prints, wild hairstyles, plaid, metal accessories, black, and black.  Did I mention black because it must be the official color of rock and roll?  When it comes to rockstar fashion black is the new black. 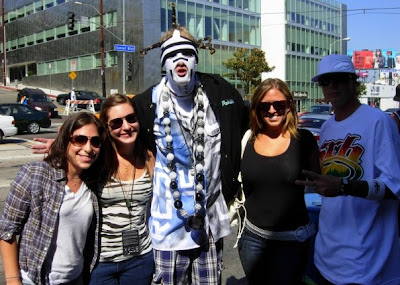